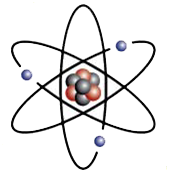 In school we were taught that everything in our existence is made of elements and those elements are made of atoms. The amount of protons and electrons in an atom determine the type of element that they create. This is the same information that is presented when we look at the periodic table of elements. Based on this understanding, you, me, this screen that you are reading this on, the chair your sitting on, all of it is made up of elements which are made up of atoms. In other words, everything is made up of atoms. According to mainstream science, an atom is composed of protons, neutrons and electrons. The protons and neutrons come together to form the nucleus while the electrons orbit the nucleus. We know that atoms are 99.9999999999999% space. Think about that for a second. That is 99 with a decimal place and 13 9’s after it. That is a lot of space. Let us look at it from a different perspective. If the sun was the nucleus of the atom, we would have to travel to Pluto and then back to equal the same distance between the nucleus and the electron. There is a lot of space in an atom and the space between the nucleus and the electron cannot be occupied by anything else. When atoms come together they attach to the sides of each other.

Thanks to Nassim Haramein and his teachings on “Unified Field Theory” and M.T. Keshe with his teachings on plasma physics, we are now starting to understand the nature of the world that we live in. The answer has always been there, we just needed to look at the information from a different perspective.

While reductionism may work with a clock, it does not work with nature. For instance, if a piece of wood can hold 50 pounds, then logically we would think that two of them together would hold 100 pounds. In actuality, the two pieces of wood will hold more weight than the sum of the two separate. There are many more examples of this in nature however one thing is for certain, nature does not operate off reductionism, it works of synergy. Synergy states that the total effect is greater than the sum of the individual parts.

One of the biggest questions currently being addressed by the physics community is how everything ties in together. Our current physics models were created using Decartes’ model of reductionism therefore it breaks everything down into smaller and smaller components giving everything discovered names. According to physics there are four fundamental forces in nature.

String theory was supposed to tie all of this together however there are many theories and no one can agree on one. CERN has spent billions of dollars creating the LHC (Large Hadron Collider), a particle accelerator, where they speed up particles to near the speed of light and then smash it to see what the particle is made of. 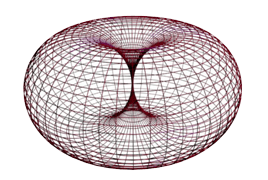 We now understand that everything in this universe has an energy field around it. In the metaphysical community some refer to it as the aura but it can easily be found in nature. This energy field is in the shape of a torus, some refer to it as a doughnut. According to the understanding of plasma physics the energy field that we are talking about is nothing more than a combination of magnetical and gravitational fields. If we go back to the atom with this new understanding, the protons, neutrons and electrons in an atom are a combination of magnetic and gravitational fields. 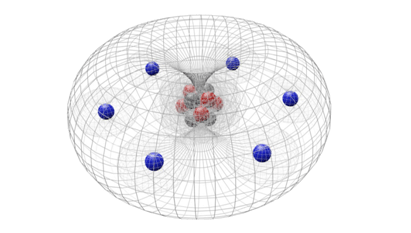 In the image of the atom, the protons and neutrons are being pulled together to create the nucleus due to their gravitational strength being stronger than their magnetical strength to one another. The combination of their fields creates its own field that pulls the electron towards the centre however, because the electron’s and the nucleus’ magnetical fields are strong in regards to one another, the electron never comes any closer. In this case it would be like two magnets with the same poles facing each other.

If we look in nature, we can see that there are many signs that show the natural flow of the universe. Keep in mind that these fields flow in a spiralling motion from the outside to the inside. This will become more understood as you look at the following examples. We can see it in the foods that we eat for example an apple or a pear forming in the shape of the toroid when cut in half. 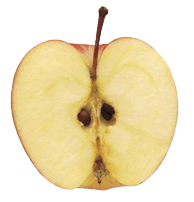 We can see it anytime we flush the toilet or wash the dishes. The view of a toroid field from the top as the water gets pulled to the centre. Natural whirlpools are another example. When looking at the tornado, think about this. What would the tornado look like if there were no clouds or debris to get sucked in? Would you even be able to see it? Below is a picture of earth’s magnetic field as presented by Nasa. 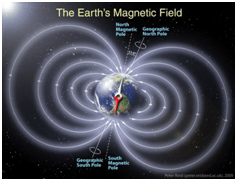 The HeartMath Institute has done extensive research into the energy field of the heart and has even created instruments that can detect it. 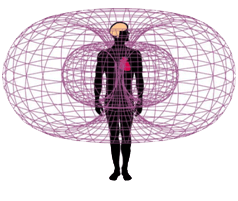 There are many examples that show the natural flow of nature but until recently, there have not been enough people to go forward with the idea. One brother by the name of Nikola Tesla had an understanding of this flow. If you are not familiar with Nikola Tesla, he is the reason we currently have A/C electricity in our homes. He is the reason we have wireless communications, cell phones, Wifi, etc. How about the radar that airports use to track their aircraft? When was the last time you had to get an X-ray? Tesla was responsible for that as well. Neon lighting, electronic motors, all of these were ideas brought forth by Nikola Tesla and many more. This brother kept telling everyone, if you wish to understand the secrets of the universe you must look at it in terms of energy, frequency and vibration. This is where we are heading.

If everything is made up of magnetical and gravitational fields, then everything in this Universe is either attracted to something or it is pushing away from it. If we understand this, we can replicate it at any scale with the same results. As above, so below. As within, so without. We are the microcosm of the macro. It is a universal and natural law. For instance, a particle attracts other similar particles because their gravitational strength in relation to one another is higher than their magnetical. An example would be a drop of water reintegrating with the whole. Anything that does not have the same gravitational and magnetical relationship will be pushed away like two magnets with the same polarity. As is the case oil and water.

The sun pulls all the planets in the solar system towards itself because it has a strong gravitational field but once the magnetic fields of the sun and the planets interact, the planets stop moving closer. This in turn creates the orbit of the planet. The same thing happens between the planets and their moons.

If we look at this on a social level, we are attracted to people with similar characteristics or personalities yet we push away those that we do not resonate with. This doesn’t necessarily mean we have anything against them, it just means that we have no common characteristics so we do not associate with them. Think about people you work with or went to school with that you never spoke to. Your paths never had a reason for interacting. The same can be seen when it comes to everything in our lives.

If everything in an atom, including the atom itself, is nothing more than MaGrav fields (the combination of Magnetical and Gravitational fields) and everything in this universe is composed of atoms, then everything is just Magrav fields. When these fields interact with each other they create what we see, what we hear, what we feel, what we smell, what we touch, what I like to call “The Experience”. In other words, “The Experience” is not real in the physical sense. It is a holographic projection of the mind. The only thing that is real in this sense is the magnetical and gravitational fields. The mind takes that information and creates the world we perceive.

It is starting to become popular in our consciousness that we live in a holographic universe and each day we are finding more and more evidence of it. Once we change our perspective and start seeing the world this way, our experience changes.

If we look at the world differently, we can interact with it differently and if we understand that everything in this universe is nothing more than Magrav fields, then there is no difference between myself and the keyboard that I am typing on. Everything in this experience is but an extension of ourselves just like our fingers and toes and just like our fingers and toes, we can move them with our intention. When we get to a level of understanding where we “know” this just as much as we know every time we flip that light switch we will have light, many things become possible, just imagine!