Ozone was first discovered in the late 1700’s. It was scientifically identified as a compound in 1840. Ten years later the first ozone generator was build and used in the Netherlands for water purification in 1893. Throughout the 1900’s ozone gripped the minds of scientists and physicians. It was first used as a preservative for cold meat storage in 1909, followed by the German Army using ozone to treat battlefield wounds and infections in 1914. In 1915 German physician Albert Wolff went a step further treating skin diseases with ozone. In 1939 it was discovered that ozone prevents the growth of yeast and mould during storage of fruit. In 2001 the FDA approved ozone as an antimicrobial agent for direct contact with food.

The use of ozone in water treatment has increased significantly since its first use and is now widely used, especially in Europe where pollution and subsequent eutrophication have complicated water treatment. Although only used initially for disinfection, the usefulness in other aspects of water treatment has become more apparent.

Ozone is an environmentally friendly alternative to many chemical processes. It has a high redox potential, can be generated at the point of use and is easily converted back to oxygen. Since ozone is an unstable molecule, ozone has to be generated on-site. A common technique is electrical discharge, also called silent electrical discharge. By applying high-frequency alternating voltage to oxygen gas (O2), the oxygen molecules are split into atoms. Ozone (O3) is formed by recombination of atomic and molecular oxygen.

Ozone is a naturally created by two methods, lightning or UV light. Nature uses these two methods to break up oxygen molecules to form ozone. Corona discharge, the preferred method of creating ozone, mimics lightning by forcing air between high voltage plates. The discharge between the plates breaks down oxygen recombining as ozone. 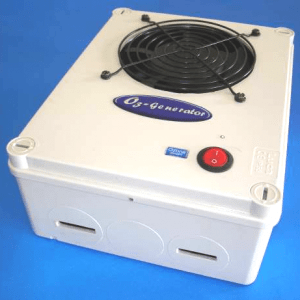 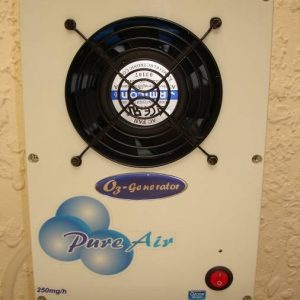 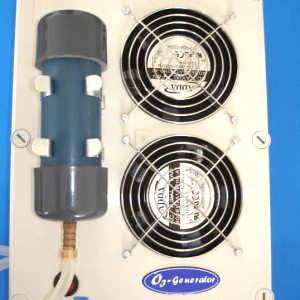 Ozone is an extremely strong oxidiser generally not harmful to mammals at low concentrations, but lethal to microorganisms such as bacteria.  Like any oxidising agent, it could be harmful and should be handled with care. Majority of humans can smell ozone long before it is dangerous.

Did you know that, to date, there has not been a single bacterium, virus or cyst discovered that can withstand ozone? Ozone kills them all.

How does this occur? Well, ozone interferes with the metabolism of bacterium-cells, most likely through inhibiting and blocking the operation of the enzymatic control system. A sufficient amount of ozone breaks through the cell membrane. And this leads to the destruction of the bacteria.

Ozone generation typically uses ambient or dry air. Depending on the circumstances and your specific need, you could purchase the standard ozone generator with a fan which circulates ambient air through the corona plates to create ozone. If you prefer dry air as a feed for ozone production, then a positive displacement unit is attached to the outside of the treatment area, bringing in moisture free air into the unit. In regions with high humidity a positive displacement unit would be the preferred choice. Delivery of Ozone into water is done by means of silicone tubing and a bubble diffuser.

Ozone therapy has been utilised and heavily studied for more than a century. Its effects are proven, consistent, safe and with minimum and preventable side effects. It is used as a disinfectant in theatres across the world, and by many physicians utilising it to treat disease.

Mechanism of actions is by:

For the treatment of external wounds ozone gas baths has established itself as being the most practical and useful method. Ozonated water is widely used by dentists, optimally applied as a spray.

Ozone therapy has been found to be useful in several ways in medicine. When it was first used more than 150 years ago, it was to disinfect and treat diseases during the First World War. Its application to wounds showed not only its ability to disinfect but also to aid blood flow and produce anti-inflammatory effects.

Did you know the first patent for an ozone generator was by Nikola Tesla in 1896.

Although ozone is a gas, developments in technology mean it can be used in several forms and different ways, including:

There have been some promising studies examining how ozone may be beneficial to health by: