What are Nano Particles?

In the study of plasma physics as taught by the Keshe Foundation, Nano particles are used for two different purposes. The first use is to create GANS, Gas at a Nano State, while the second is to act as a carrier or a conductor for the transmission of MAGRAV fields.

Nano refers to the scale that we are working with, in this case the size of an atom. Particles are simply physical matter so we are dealing with matter at the size of an atom. Let us look at copper as an example. If we look at a copper plate we can see that it’s in a solid matter state, it is a combination of many atoms held together very tightly.

We know that the copper plate is nothing more than many atoms that are held together through their fields to create the solid physical matter. In this case the copper plate is of a positive polarity. We can compare this to a magnet. We know that a magnet has both a positive side and a negative side. We can see that if we were to take two magnets and point the same poles towards one another, what we end up with is repulsion. The magnets will push away from one another. If we were to flip one of the magnets so that we are dealing with the positive of one magnet and the negative of the other, the magnets will find balance and stick together.

From metal to Nano

When we look at a piece of copper wire in its original state we will say that it has a positive charge. When we heat up the copper, the outer layers will go from the solid state to a liquid followed by a gas and then start to separate and release from itself. Once this happens, the polarity on the Nano particles flip from positive to negative. What happens when we introduce positive and negative? They stick together remember? Now what we end up with is a copper wire that has a positive charge with negatively charged Nano particles stuck to it. We would see the first layer stick to the copper wire because we are dealing with a positive wire and a negative Nano particle however the second layer and every layer after will not touch. All of these Nano particles are negative polarity and like a magnet, they will push away from each other however, because the cooper wire has a stronger gravitational field than the individual Nano particles, they will all be pulled towards the copper. What we end up with is layer upon layer of Nano particles that are attracted to the wire but repel from one another. 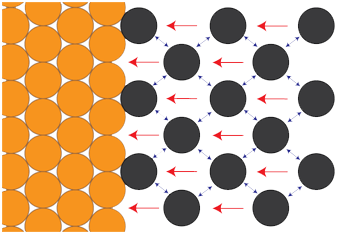 What we now see is a solid copper wire with layers on the outside made of Nano particles and in between these layers we have channels of MAGRAV fields. We now have a super conductor, a conductor that can transmit with no resistance. Per Keshe, this is the first time we have been able to create a super conductor at room temperature since we are not dealing with electricity.

When using electricity we are dealing with the exchange of an electron from one atom to another and this exchange in matter creates heat. In order to send many electrons down the wire at a high rate of speed we would create a lot of heat and then need to cool the components. Because of that, much is spent in terms of resources to reduce the temperature to the point where this is not a factor. MAGRAV does not deal with electricity therefore this is never an issue. 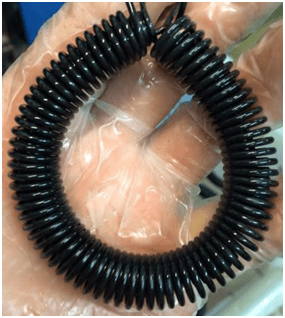 When we look at this from the perspective of MAGRAV fields, every single one of these Nano particles is created by their own fields, remember we are dealing with fields here not necessarily the particles themselves. The physical particles can be seen as a container while the fields are what we use from within the container. If we wanted to drink a glass of water, the intention would be to consume the water and leave the glass since it is just the container that holds the water. In this case the water would represent the MAGRAV fields while the glass would represent the physical Nano particles.

We now understand that Nano particles are individual atoms of their original source that are no longer attached to one another. We use them for the fields that create them. Their fields are pulling in other surrounding fields through their gravitational fields while also pushing them back out through their magnetical fields. Next we will look at how we use this to create GANS followed by how we use it as a conductor.

When we look at the copper plate we see that we have physical copper that is attracting its Nano counter parts due to the particles finding balance with the physical copper. In order to create GANS we now need to release the Nano coated layers from the physical copper plate. In current mainstream science we have a tendency to use force to push things apart since we do not know how to work with gravity however, using the Keshe Foundation’s understanding of plasma physics, we now know how to attract one particle to another using their fields. Instead of pushing the Nano coating off, we will use other surrounding fields to suck it off the plate. Think about cleaning a floor. What is going to do the best clean up job with the least about of effort, a broom or a vacuum?

In this case salt water becomes our vacuum. When we submerge the Nano coated plates in a salt water solution, the Nano particles find balance in the salt water and release themselves from the plates. When this happens they interact with the fields that are already in the water from H2O to whatever elements are in the water already. If you have another copper plate on the other side of the bin, you end up with H2O and Cu. As the Nano particles are released into the water, their fields interact with all the fields in the water and the result is a balanced field that creates what is known as GANS. When we use different plates or add sea water we change the fields in the water to create different field combinations which in turn create different types of GANS.

Nano particles as a conductor 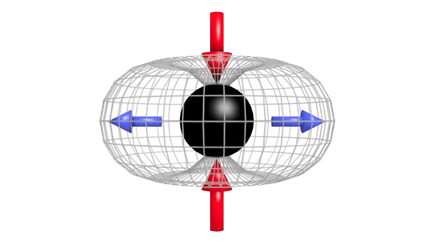 GANS is sending fields out and Nano particles are sucking them in and pushing them back out. In this case GANS is the power source and the Nano particles are the conductors to transmit the fields of the GANS to wherever we would like to send them.

Nano particles are an essential part in the production of Plasma based devices using the understanding provided by the Keshe Foundation. These particles are used to transmit fields, restructure fields and have a wide variety of uses including free energy, transportation, health care, food applications and much more so get out there and start building. There is a very large community of people looking to build and help one another with their projects.

Should you be interested in acquiring the Pain Pen which is a special Nano coated wire, proven to improve and regulate pain within the body, then please do so by going to our store.

Should you interested in building your own healing devices then please visit our store where you can purchase your own Plasma Tools.

Should you be interested in acquiring a device that systematically Nano coats your home’s wiring then please visit our store for more information on the Magravs Home Power Unit.

Alternatively please go through the rest of the Teachings & Articles for links to blueprints and information on how to build plasma devices yourself.